During Facebook CEO Mark Zuckerberg’s second day of Congressional testimony Wednesday, he was asked about Diamond and Silk, two sisters known for their pro-Trump beliefs who have garnered a large conservative fanbase.

Reading from a message he said was sent to him by a constituent via Facebook, Republican Rep. Joe Barton of Texas said: “Why is Facebook censoring conservative bloggers such as Diamond and Silk? Facebook called them ‘unsafe’ to the community. That is ludicrous. They hold conservative views. That isn’t unsafe.”

“Congressman,” Zuckerberg responded, “in that specific case, our team made an enforcement error and we have already gotten in touch with them to reverse it.”

Zuckerberg appeared to confirm the news that Facebook had sent Diamond and Silk, otherwise known as Lynette Hardaway and Rochelle Richardson, a note saying their “content and brand” were “unsafe to the community.”

Sen. Ted Cruz also brought up Diamond and Silk during his heated exchange with Zuckerberg on Tuesday, citing them as an example of what he characterized as Facebook’s “pattern of bias and political censorship.”

Who are Diamond and Silk?

With 1.3 million followers on Facebook, Diamond and Silk are a North Carolina-based pair of sisters who grew a substantial conservative fanbase thanks to their charismatic videos supporting President Donald Trump.

Throughout Trump’s candidacy and tenure in the White House, Hardaway and Richardson, who are both black, have defended his rhetoric on race and immigration, among other policies and platforms. The duo traveled around the country in 2016 to stump for Trump on the campaign trail and joined him on stage at a December 2015 rally in Raleigh, North Carolina. 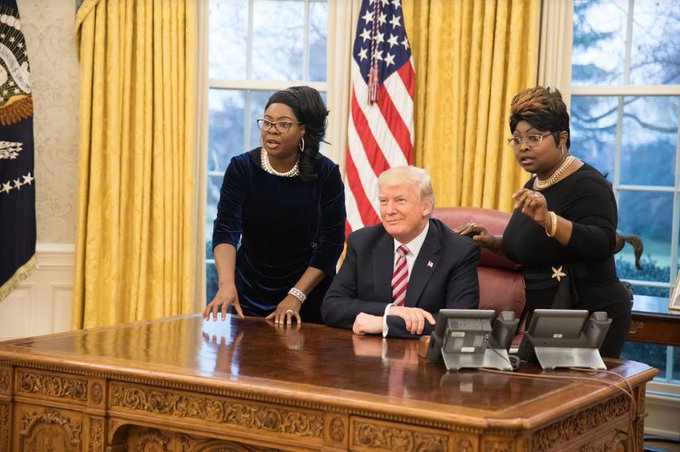 Diamond and Silk appeared on Fox News earlier this week to discuss the Facebook kerfuffle, saying they noticed reduce engagement on their page for months and received a note from the social media company about their content last week. “We are two women of color, how are we unsafe?” Hardaway said, according to Fox News. “We don’t sell drugs, we don’t belong to no gangs. It’s offensive, it’s appalling, it taints our brand.”

In a statement on Facebook Monday morning, Diamond and Silk said the company had “not communicated directly” with them about the issue, through Zuckerberg or a Facebook representative.

“The message they received last week was inaccurate and not reflective of the way we communicate with our community and the people who run Pages on our platform,” Sarah Pollack, a spokesperson for the company, told the Post. “We have provided them with more information about our policies and the tools that are applicable to their Page and look forward to the opportunity to speak with them.”

5 Fantastic Examples of Brands That Use Virtual Reality (VR)

Connected Technology & The Future of Your Data

These platforms will help you connect with your favorite celebrities!

Harry Potter and the Sorcerer’s Stone by J.K. Rowling

March 31, 2018
The Odyssey Online promises to be a fair and objective portal, where readers can find the best information, recent facts and entertaining news. The Odyssey Online is the best selling Guest Post of all time and powers this amazing sites!
Contact us: [email protected]

Why Everyone Should Read Harry Potter

Book 2: Harry Potter and the Chamber of Secrets